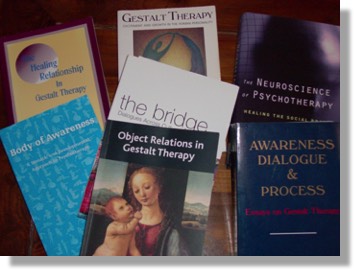 Gestalt  therapy has its roots in psychoanalysis. The founder of Gestalt therapy  is often referred to as Fritz Perls, although, it was he and his wife,  Laura Perls (formerly, Lore Posner) who developed the approach in the 1940’s and 50’s. The Perls' were German Jews who fled their country when Hitler and the Nazis rose to power. After a short stay in Amsterdam and South Africa, they settled in the USA. They were drawn to Freud's concepts in psychoanalysis and after having their own analysis, they subsequently became dissatisfied with  some aspects of it. So, whilst maintaining a partiality for  some aspects of psychoanalysis, including strands of Reichian Character  Analysis, the Perls eschewed other aspects. Adding to this theoretical  foundation, they drew strands together from several other diverse  traditions, such as: Existentialism, Phenomenology, Gestalt Psychology,  Field Theory and Eastern Philosophy. Fritz Perls called this new interwoven  approach Gestalt therapy.

Whilst living in New York, the Perls' met Paul Goodman, an anarchist philosopher whose work included a critique of competitive consumer society; and making a stand for more inclusive, meaningful relationships and societies. They also met Ralph Hefferline, an American psychology Professor. It was from here that Fritz Perls, Paul Goodman and Ralph Hefferline (often referred to as PHG) articulated Gestalt therapy in their 1950's seminal book, Gestalt Therapy: Excitement and Growth in the Human Personality.

‘Gestalt’ is a German word for which  there is no adequate English translation, but it sort of means whole, configuration, a unique patterning. In other words, the individual, in Gestalt therapy, is perceived and understood as a Unified Whole, rather than as unrelated parts to be worked with separately. Attention is given to mind, body, thoughts, feelings, what is in awareness, what is clouded in awareness and to the interrelational functioning patterns. The focus is not simply on the whole person in isolation, but rather on the whole person in a field context, that is, on the person in relation to the therapist and in relation to their wider relational connections outside of therapy and the recurring themes that are co-created in each of these environments. The encounter between client and therapist involves an exploration of the 'experiential now', where the things that often go unnoticed appear more vividly and can thus be felt and understood differently. With new awareness and new experiences in the therapy situation, both the expansion of choice range and the capacity to tolerate the discomfort and uncertainty of the unknown becomes possible. And this is the key to all Interconnected Contact and Growth. As PHG explain, experience occurs at the boundary between an organism and its environment, primarily the skin surface and the other organs of sensory and motor response. What is real are the "whole" configurations of this functioning; some meaning achieved, some action completed.

Subsequent to the articulation of  Gestalt therapy in the 1950’s, several variations of the approach have  developed amongst trained Gestaltists, who have different leaning  preferences towards particular strands of the approach and who formulate  their own amalgamations of those strands. However, what continues to  lie at the heart of the approach is a belief that our relationships with  others are an essential part of our existence. It is how we develop our  sense of who we are. This undoubtedly affects our sense of well-being,  mood, self-concept, our ability to cope in difficult situations and our  capacity to enjoy living. Research-based theories within neuroscience  provide the physiological explanation to this phenomenon, in that they  illuminate the inextricable links between relational contact and  neurobiological processes that determine our development and functioning  capacity throughout life.

My own practice and understanding have  been particularly influenced by findings in Neuroscience and by Phenomenology, Field Theory and some aspects of Object  Relational Gestalt Therapy (ORGT) which highlights, amongst other  important factors, ways of pitching the work at the level that each  unique individual will be able to utilise and make sense of. In  addition, my practice and understanding have been informed by way of engagement in meaningful discussions with my national and international colleagues, both in conferences and internet discussions, as well as by the wide  range of clients that I have been fortunate to work with. I am particularly grateful to the people of colour members and white members of the international Association for the Advancement of Gestalt Therapy (AAGT), with whom I have grown and learned from in our discussions around structural racism and the ongoing injustice and dilemma of white privilege.

For further information or to arrange an appointment: